The Fifth annual conference of Islamic inter-denominations of Germany 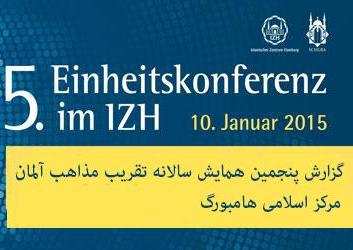 The Fifth annual conference of Islamic inter-denominations of Germany with title of : Extremism a challenge for Islam and society

The Fifth Conference of the Islamic inter-denominations and Islamic unity held in the Hamburg Islamic Centre on Saturday, January 10, 2015. This conference coincides with the birthday of the Prophet Muhammad (PBUH) and Imam Sadiq (pbuh).

The title of the conference in partnership with the Muslim Council of Hamburg was “Extremism a challenge for Islam and society”.

Since this annual conference was few days after Paris terrorist attacks, attracts considerable attentions of social and academic activists along German media (such as ZDF, NDR and Das Erste). A lot of Muslims and nun-Muslims individual audiences took place in this event.

In this conference, all panel discussions and speeches translated to Persian, German, English, Turkish and Arabic.

Panel discussions was on the following topics:

1. The Muslim community in the time of IS terrorists attacks, between public stereotypes and religion extremism.

2. The causes and consequences of the extremist movements and the anti-Salafism strategy.

3. Islamophobia as an extremist thinking and a social challenge.

4. Moderate Islam and Strategy of Muslims communities and institutions against Extremism.

The most important issues raised by the speakers at this conference included:

– Condemnation of terrorist acts in the world and in any form and by any individual, group or state.

– Condemnation of provocations activities by the parties, organizations and groups, and the media.

– Condemnation of insulting the prophets, especially insulting the Prophet Muhammad (PBUH) on the pretext of freedom of expression.

– Emphasis on brotherhood and solidarity between Shiite and Sunni Muslims against Extremist and fundamentalist groups.

– Emphasize the peaceful coexistence of Muslim community in Europe, along with all other religions and nationalities.

– Condemnation of terrorist acts which carried out in France and declared that Islam is against any intimidation of human societies.

In this conference Shiite and Sunni Muslims, Christens and Jewish Speaker presented their ideas and in the end of each panel, audiences ask their questions and the speakers answered.

The names of speakers is listed below:

– Ayatollah Dr.Ramezani, Imam and director of the Hamburg Islamic Centre.

– Aiman A. Mazyek, Chairman of the Central Council of Muslims in Germany

– Ali Kızılkaya (Member of the Islamic Council for the Federal Republic of Germany).

– Ünal Kaymakci (Board Member Islamic Community of the Shiites).

– Norbert Müller (Board Member of SCHURA – Council of Islamic communities in Hamburg).

– Abu Ahmed Yacobi (board member of the Shura Hamburg)