Imam Ali Mosque: the meeting place of common prayer of the religions for the oppressed people of Gaza and Iraq 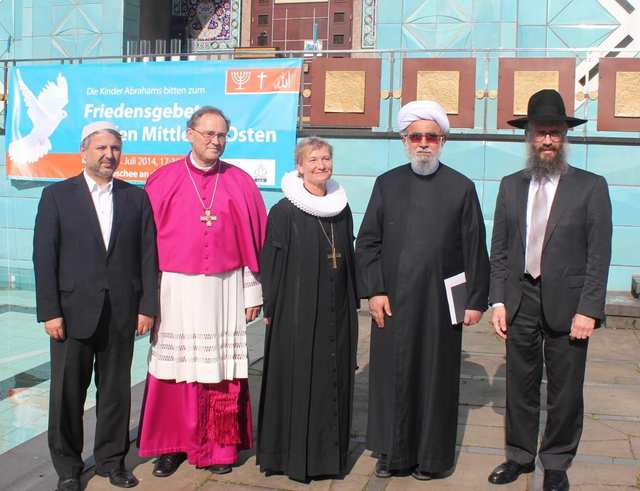 With the attempt of the Islamic academy of Germany, the magnificent meeting of common prayer of the followers of the Ibrahim religions was held in Hamburg in Ramadan Month in the July 14th 2014 in order to establish peace and safety in the world and to pray for the oppressed people in Gaza, Iraq, Syria and Bahrain.

This meeting that coincided with the felicitous birth of Imam Hasan Mujtaba (peace be upon him), the winner of peace and spirituality, was held in the courtyard of Imam Ali Mosque. Some religious personalities and the representatives of the religions were praying in different languages as they had stood in the entrance of the mosque.

Some representatives of Sunnis, Jews and the Catholic and Protestant Christians that stood in their standings and prayed to establish peace and spirituality using holy texts include ladies and gentlemen:

It should be also mentioned that the participants commemorated the oppressed and killed persons of these violent attacks with firing candles in this meeting. The magnificent attendance of most of the followers of these divine religions in the courtyard of the Islamic Centre of Hamburg emphasizes the importance of this European great centre once more and confirms its central effect on the debates of the religions. The importance and the spirituality of the meeting was as much as it attracted the attention of the media and several interviewers, reporters and cameramen attended in the time of this meeting in the Islamic centre and provided different reports in relation to this event.

At the end of this meeting, a private debate meeting of the representatives of the religions with Ayatollah Ramezani, the Imam and the manager of Islamic Center of Hamburg, was held in the Islamic academic building of Germany and in addition to the exchanges of opinions among them in relation to such a successful program, the continuity of such programs was emphasized.