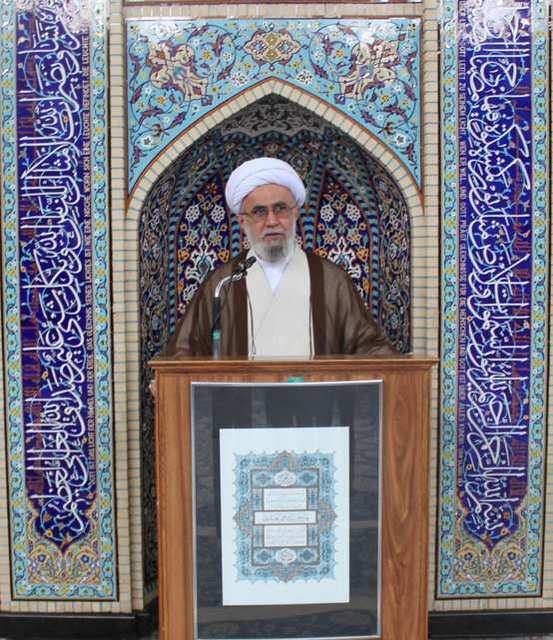 The Imam of the mosque and the manager of the Islamic centre of Hamburg Hazrat Ayatollah Dr. Ramezani
Praying as a duty toward God has a lot of social and personal effects in making relationships and as it promotes the spirituality of human in a personal area, it has an important role in making relationship between human and God and persons with each other.

A lot of matters were presented about relationship between morals and Sharia from the point of view of Quran and narrations. However, since praying is emphasized as one of important bases of the religion in all of the religions of God and is considered as a necessary affair in the religion, it seems that matters should be presented about relationship between this obligation of God and morals and spirituality.

It can be understood from the verses and the narrations that people have been created for this main purpose in order to achieve the reality. Exalted God has considered all of grounds of achieving the reality for human. One of means that has the most important role in the religion is praying. In fact, praying is the most means and the string of achieving the reality and God and it is completely clear that if a person achieves such a situation, he or she has gained the basis of spirituality that is closeness to God and the spiritual life. Hence, it has been narrated that Imam Hasan Asgari (peace be upon him) narrated

”Closeness to God is a travel that persons are pleased to achieve only through praying and paying attention to devotions related to night”.

It has been said that Imam Bagher (peace be upon him) stated:

” Praying is as important as if someone fulfills it and it is accepted by God , his or her other deeds will be accepted by merciful God”;

Praying is important because this obligation of God helps human to ascend the peak of spirituality and morals and it is considered as the best treatment for healing spiritual and mental problems. Likewise, praying can somewhat determine the faith and the monotheistic rank of human because persons can observe the beauty of God with their hearts and senses through praying and every day they present the reality of paying attention to exalted God several times and show the rank of closeness to God and lovers show their spiritual presence to their beloved creator.

Praying has an absolute role in unity and rightness. A believer that prays can achieve the highest rank and the peak of spirituality that is assurance paying attention to the names and the attributes of God;

This matter is presented in the Islamic mysticism in detail; if persons want to achieve the reality and beautiful inner, they should pass the path of Sharia and the rules of God because Sharia is only means of achieving reality and spirituality until the last moment of the life. Hence, this is a false imagination that if someone achieves certainness, reality and the peak of spirituality through Sharia, he or she will be needless of Sharia and the path because even if a person achieves the peak of spirituality, there will be some ranks in the peak of spirituality that involve knowing the way of living and Sharia more than the past. Moreover, threats appear in each rank differently; hence, we need shelter and resort more so that persons can resort to him in each stage and rank. And God shelters persons in all stages of religious path as this point has been clarified in this verse of sacred Surah of Hamd

Praying that is fulfilled carefully with all of its conditions increases the presence of heart and faith in God and fascinates human the beauty and the greatness of God. Persons with such presence and attention get object lesson from tortures descended upon others as this important point has been emphasized in this sacred verse

”Definitely, there are object lessons in these tortures for persons that have conscious hearts or listen them carefully”.

If there is not such a spiritual mood for persons, they will face to serious threats; as a consequence, their hearts will not be influenced any more as it is referred in the following sacred verse

And it has been narrated from Imam Bagher (peace be upon him);

” The hearts of all persons are white, but when they commit sins, a black point covers it and if persons repent , it will be removed. However, if persons commit a lot of sins that cover the whites of their hearts, they will not have benevolent hearts any more”. This matter has been expressed in this sacred verse

If a person that prays as the most important way of achieving spirituality pays attention to exalted God, God will pay attention to him as well as Imam Bagher (peace be upon him) narrated that the messenger of God( peace of Allah be upon him and his descendants) stated

In this matter, we have concentrated on praying that has a deep relationship with morals and spirituality and it is possible to transfer this relationship to all of the rules of God and Sharia. In other words, all of the rules of God leave such effect on the soul and the spirit of the society and persons and establish safety and comfort in the society. Hence, as praying is to deal with virtues and to avoid vices, attributes (whether good or bad) influence the acceptance of praying by God. As it has been said in a narration, if a person has little vanity in his or her inner and hypocrisy and pretension include his or her intentions for praying, their praying will have no value and even in some cases, it is not accepted from jurisprudence aspects. Very important point that should be paid attention deeply is that there is a deep relationship between moral regulations and jurisprudence religious regulations from the aspect of acceptance and ignoring them causes that no devotions have their own places. Such an important matter can be understood if the verses and the narrations related to this matter are paid attention more.

In conclusion, all of the rules of God such as praying, fasting and Hajj and even rules that are considered from financial aspects such as Khoms (Islamic tithe) and Zakat (alms) have very deep prelateship with the area of morals and spiritual matters and if their customs are paid attention and acted, the society of human will experience and observe the moral society of the religion.