The eighth assembly of the scientists, clergymen and preachers of Germany and Holland 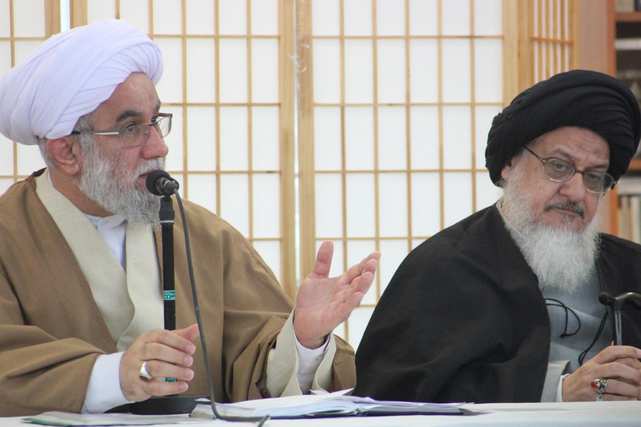 The eighth assembly of the scientists, clergymen and preachers of Germany and Holland in the Islamic centre of Hamburg

The annual eighth assembly of the scientists, clergymen and preachers of Germany and Holland with the topic ” the necessary points related to the introduction of the personality of Imam Hussein (peace be upon him)” was held in the Islamic centre of Hamburg on the October 21st in 2014. These assemblies are held in order to exchange opinions about the most important matters of preaching and the priorities of clergymen and the Shiite scientists in the region. This assembly was held with the presence of over fifty persons of the scientists of the region.

It should be also mentioned that the special guest of this meeting was Ayatollah Seyyed Ali Milani, the prominent instructor of the theological school of Qom.

In this ceremony, Ayatollah Ramezani, the Imam and the manager of the Islamic centre of Hamburg, felicitated the occasion of the felicitous Eid of Qadir Khom , emphasized on the importance of the greatness of such a day, expressed the most important message of this important event as referring to sagacious and good persons in all affairs of the life and added ” one of points that can be used about the event of Qadir Khom is the correct understanding of the religion and the appropriate explanation and analysis of the religious trains should be present after the decease of the prophet ( peace of Allah be upon him and his descendants). Hence, one of the most important duties of Amir Momenan (peace be upon him) was the interpretation of the verses of Quran and the explanation of the trains of the Islam because he is the language of Quran, the door of science and the door of the treasure of God.

The manager of the Islamic centre of Hamburg mentioned the story of Karbala as a unique case in the world in his remarks and added ” we observe the extended presence of people in the mourning ceremonies of Imam Hussein (peace be upon him) throughout the world every year in Muharram Month and in these ceremonies, common sense and delight are seen together. Ashura Day throughout the world is the greatest university of training, science and spirituality. The attempt of scientists and clergymen on the day of Ashura should be in three areas: 1. the authentic narration of Ashura event; 2. the appropriate analysis of this event; 3. the establishment of a relationship between the events of that era and the current era. Unfortunately, there are not enough activities in all of three areas nowadays. There are some distortations about the events of Karbala yet and scientists should pay attention to them. The remarks and the practical and scientific way of the life of Imam Hussein (peace be upon him) should be introduced and narrated to persons appropriately and deeply. The messages and the lessons of Ashura are deep and thorough. It should be paid attention that we do not want to narrate and analyze a historical event, but the events and the analyses of Karbala can be used nowadays; for example, Imam Hussein (peace be upon him) has referred to the duty of the elites of the society and it is necessary that the preachers of the religion deal with it carefully in these days.