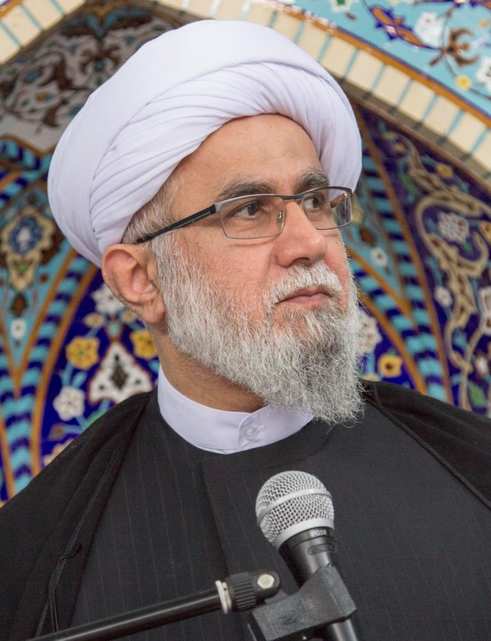 Imam of the mosque and manager of the Islamic centre of Hamburg Mr. Ayatollah Dr. Ramezani
In other words, because the prophet is considered as pattern for people all over the world, God has ordered to fulfill night prayer. Of course, fulfilling obligations as desired actions of God makes human beings achieve high positions and ranks. Hence, by paying attention to each rule of God, human beings can achieve the satisfaction of God that is the purpose of the creation of human beings.

In the name of God, the Compassionate and the Merciful

One of the important matters about the sharia is to what extent the sharia, that means path and regulations, can influence the perfection and religious promotion of a person?

There is no question that this matter depends on the meaning of the perfection of human. If the perfection and bliss of human beings depend on material affairs, it seems that there is no need that a person follows the sharia and the divine rules and fulfills the obligations. It is completely clear that there are other ways than obeying the sharia in order to achieve the positions of the world. However, a person that wants to be like others can’t easily follow the divine rules because he or she may use instruments and means that are not permitted in the sharia in order to promote (such as becoming the boss of an office and achieving higher position in a workplace). For example, he or she may tell a lie, insult others or flatter in order to achieve the worldly purposes.

If a devout and religious person considers his or her position much better than worldly affairs and his or her rank high and valuable after he or he is guided towards the sharia, the perfection of a person is definitely defined in approaching the attributes of God such as wisdom, science, mercy, kindness and so forth as these meanings have been mentioned in the Quran. Likewise, a person is able to achieve guardianship and caliphate and tries to achieve the desired perfection gradually with values and real virtues.

It turns out from the previous matters that the sharia in the Islam is so that each Muslim can recognize his or her duties in each stage of personal and social life and does not go awry by recognizing the right path. In fact, the sharia organizes the affairs of life and the doomsday and helps human beings to achieve their ideal perfection. Hence, all Muslims, whether special or common, need the sharia as the path of their life until the end of their life for the happiness of the world and doomsday and they need it all over their life. Of course, from the point view of the Islam, following the sharia is to keep the real value of human beings. In other words, by worshiping the exalted God, people will experience cheerfulness, freshness, comfort, relaxation and safety.

Although a person may face difficulties in worshiping God, he or she accepts all of them in order to achieve the desired result because they have believed that only the exalted God as the single creator is aware of real bliss of people and whatever God has specified as rules and path will definitely lead human to real bliss and happiness. Human beings know that God is rich and out of need and he does not need his creatures to worship him, but if they worship God and follow his orders, they and the society will benefit from it.

Little by little, by doing good deeds, they achieve spirituality resulting from their close relationship with God and these result in the establishment of the attributes of God in human beings. Hence, the extolled rank, that has been expressed in this sacred verse, is gained after human beings stay up late and worship and fulfill the good actions of the night.

In other words, because the prophet is considered as pattern for people all over the world, God has ordered to fulfill night prayer. Of course, fulfilling obligations as desired actions of God makes human beings achieve high positions and ranks. Hence, by paying attention to each rule of God, human beings can achieve the satisfaction of God that is the purpose of the creation of human beings.

Other advantages of obeying the divine sharia are to train material and non-material aspects of human beings because following the sharia can lead all the strengths of human beings to a right path and virtue. Hence, the Quran has reminded this point that the exalted God is aware of whatever tempts human beings and deviates them and the only way of controlling those temptations is to take care of the divine  rules.

If all divine rules  are studied and analyzed and their secrets are found out, it can be concluded that the only way of achieving to truth, reality, honesty and a real rank is possible through following the sharia. Of course, it is completely clear that the higher the position of a person is, the more he or she needs the sharia and it is not in the way that if a person achieves a religious and divine position, he or she does not need the sharia as the more you go up steps, the more you should take care of the rules of the sharia. Hence, scientists, jurisprudents, governors and well-learned people need the sharia and divine rules more because their deviation makes a lot of people go awry.

As it has been said in the narration, deviations of scientists are like a ship that drowns and makes people sitting in it drown.

Of course, a scientist goes awry when he does not follow the sharia any more.

In conclusion, the sharia provides the ground of perfection for each person in any social class and without the sharia, human beings cannot achieve the desired perfection. The more people go up the steps of promotion, the more they need the sharia. This matter is true about prophets and Imams as well. Therefore, although the prophet had a high position and rank, he regularly prayed, worshipped God and said